skip to main | skip to sidebar

Is anybody out there?

I never thought I would be a homeschooler. Homeschooling was for religious fundamentalists, back-to-nature extremists, and parents who believed their kids were the new Einsteins. Homeschooling was for the extraordinarily anal and the extraordinarily loose, not for ordinary people like me. I lack the organization, the discipline, the follow-through to push my kids through the scientific method, daily baths and well-rounded meals. I lack the easy-going, stream-of-consciousness, follow-your-bliss free spirit to focus on Japanese folklore for three weeks followed by concurrent units on locking mechanisms, archery and sculpting clay. I lack the patience. I lack the desire. Or so I thought. Because this fall, I will join the ranks of those educational Froot Loops.

Kayleigh will be in 11th grade. The plan is for her to take art and electronics at the high school and the rest of her subjects at home. With me. State law allows her to take two classes at her home district school while being homeschooled, as long as there is space in the classes she wants. The school can choose to allow her to take more than two, but they don’t have to. She is required to take 875 instruction hours per school year and study, minimally, language arts, reading, math, science, social studies and health in sequentially progressive courses.

We’re busily gathering advice from other homeschoolers and researching curriculum. In some respects it’s exciting. Kayleigh is delighted at the thought of studying history that does not involve the American Revolution or Civil War. But in other ways, it’s pretty daunting. I don’t really remember much about chemistry. I mean, when’s the last time I needed to know the atomic charge of calcium? The last time I took chemistry.

It’s not just daunting academically, either. Kayleigh and I have a lot in common, and I think we get each other. But we also are very different. We’re motivated in different ways and our interests are often miles apart. Basically, we can drive each other absolutely nuts. I know that’s true of any mother-daughter pair, but we’ll be stuck together. She can’t slam a door when she doesn’t like it that I’ve asked her 14 times to focus on the limit of X as it approaches infinity rather than what her Achilles tendon feels like when she repeatedly bangs it against the metal barstool – just as I can’t throw my hands up in frustration and stuff my face with chocolate in said situation. Just wait until we’re both in the throes of PMS. Eek.

Kayleigh is a smart kid with a unique temperament. She also has ADD. Although she has usually done well academically, she has never really gotten along with school. School is very regimented, and there is little room for creativity or exploration. She has the rule-centeredness of most first children, but her head is happiest, and perhaps most productive, in the clouds – or, more accurately, in the worlds she created in her mind. She did not excel at rote memorization of math facts, and a packet of instructions for a history project or an English paper that basically tells her line-by-line what to write is completely overwhelming. But she slogs on. The perfectionist in her has kept her going until recently.

She is a well-behaved child. She doesn’t need to be lectured, yet again, on what constitutes acceptable behavior at school, unlike the children who have cut her hair, spit in her face, sworn at her and dubbed her a reject. Hell, even the rejects have finally rejected her. She was often unaware when other children tried to befriend her, likely a result of the ADD. As time passed, they stopped trying. The teachers she didn’t enjoy have called her aloof and oversensitive. The ones who saw past her shyness and self-doubt think she is bright, talented and a joy to teach. They encouraged her to open up more, but after years as a square peg, she gets no satisfaction from participating. Even now that her classmates simply see past her and she could probably say and do anything without social recourse, she remains silent. It is her defense and offense.

I hope that in the last two years of high school we can give her opportunities for meaningful exploration and expression free from the bounds of brick walls, lengthy assignments designed to prepare her for her next standardized test, and judgmental classmates. We are proceeding with hope and excitement, as well as a bit of fear and nervousness. I think we’ll be OK.
Posted by Amy at 7/23/2010 09:27:00 PM 6 comments:

If you were here on Father’s Day
I’d feel your rough hands and bristly whiskers
I’d light your cigar and play some Spike Jones
I’d broil you a steak and buy you a beer
If you were here. 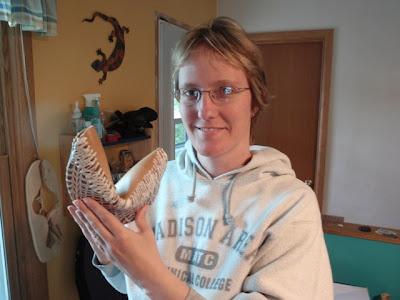 This is my birthday cookie (and my unwashed hair). The cookie was huge, as you can see, and delicious. Highly recommended: Lady Fortunes. They make custom cookies for all occasions. Cool.

I recently turned 40. I'm not thrilled.

Turning 30 wasn't bad at all. I tend to think of the 30s as the heyday of adulthood. You're still young, but you've moved past your 20s, where people still treat you like you're 17 and don't know anything whether you know anything or not. You're often building a family and a career and your body hasn't betrayed you yet, or at least not much.

But 40. Forty is a time to reflect on how much youth you wasted, all the doors you've closed, a time to feel the creaks in your joints and examine the wrinkles on your neck - when did those get there? Your children are older and snottier and demanding more of your money and sucking you of your innate protective tendencies. Your parents are older and dottier and demanding you clean their bathrooms after you've picked up their prescriptions.

But 40. Forty is also a time to exploit your withering hormones and tell everyone exactly into which dark crevice(s) they can stick their, uh, demands. Forty is a time to do the things you were too afraid or too broke to do when you were younger. It's a time to re-live some of your glory days or live them the way you would have if you hadn't been busy with building that career and family. It's a time to reacquaint yourself with your partner now that the kids aren't sleeping between you. It's a time to eat at decent restaurants instead of cheap, family-friendly ones.

And it's a time to buy some new toys. Men get themselves a nice new sports car. And women, that is, this woman, got herself a nice new (used) motorcycle. 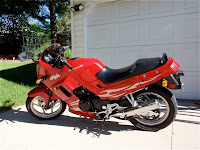 This is Julia Joy. I always wanted a Julia. And Joy goes without saying. Red. It matches the drum set I got when I turned 30. Heh.

I had a motorcycle years ago, but I sold it when Kayleigh was little. I wasn't using it and we needed the money. I always kind of regretted it, and every spring and fall since then I've looked through the want ads to see what's out there. This year, Julia Joy was out there. I love her and will take very good care of her.

Those milestone birthdays are so good for giving us an excuse to spoil ourselves. Bring on 50, baby.

Way Out West: Putting the Fun in Funeral

Are You Gonna Eat That?

Family, Friends and Other Fun Stuff